Arrested for DUI in Pierce or King County? 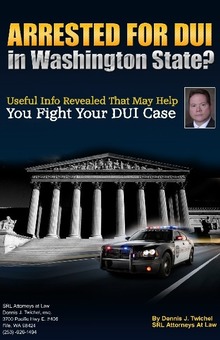 PDF
Download my free E-book that may help you Navigate your DUI Case in Washington State.

***Disclaimer*** Some of the information contained in this publication needs amendment due to recent changes in the law. Please contact Attorney Dennis Twichel for more information. 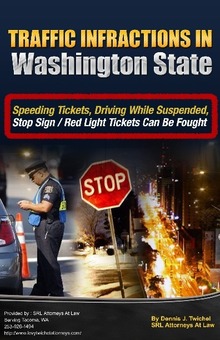 PDF
Your free E-book guide to Traffic Infractions in Washington State including Speeding Tickets, Driving While Suspended,
Stop Sign, Red Light Tickets and Other Moving Violations. These Can Be Fought and Won!


***Disclaimer*** Some of the information contained in this publication needs amendment due to recent changes in the law. Please contact Attorney Dennis Twichel for more information.

Drive drunk, too fast or recklessly and watch your premiums increase........

Got caught and now you wonder why your car insurance rates went up?
The website insuranceQuotes.com is out this week with its annual review of nationwide rate increases.
▪  Get a speeding ticket in Illinois and your insurance is up a national high 98.65 percent. Get a ticket in Missouri, your rate has increased 9.3 percent. In Washington, look for a 21.07 percent increase due to a speeding ticket. The national average: 29.39 percent.
▪  Get convicted for reckless driving in Hawaii and you’ll see a nation-leading 290.68 percent increase. In Louisiana, the increase is pegged at 29.28 percent, the national low. In Washington, expect an increase of 57.75 percent if you are convicted of reckless driving. The national average: 84.5 percent.
▪  If you are convicted for driving while under the influence, expect a hefty 333.85 percent increase in North Carolina, with the nation’s heaviest hit. In Maryland, with the country’s lowest jump, expect an increase of 15.28 percent. In Washington, it will increase your car insurance premium by 57.54 percent. The national average: 94.32 percent.
▪  Nationally, expect an average 21 percent increase for a minor speeding violation (1-15 mph over the limit); a 19 percent increase for following too closely; likewise a 19 percent increase for failure to signal; and an 18 percent increase for improperly driving in an HOV lane.
▪  The least expensive increase to your premium will be due to your failure to wear a seatbelt, up 6 percent.
“It’s no surprise certain moving violations result in bigger premium increases than others — and that’s because insurers have very specific data that show certain types of moving violations are more indicative of future risk,” said Eli Lehrer, president of the nonprofit research group R Street Institute.
InsuranceQuotes.com stated that the differences in the state data are based “on the way each state regulates auto insurance companies and the factors they can use to increase premiums.”
“It’s all up to how individual state insurance commissioners allow each company to assess rates,” said Dan Weedin, a Seattle insurance and risk management consultant, in the release.
Should you be ticketed for a moving violation, insuranceQuotes.com offers tips on how to save money with your insurance. Among the tips: Seek forgiveness from your insurance carrier; or perhaps make a deal with the court, seeking forgiveness, a plea bargain or offering to take a safe-driving course.
C.R. Roberts: 253-597-8535


Attorney Dennis Twichel focuses on helping people accused of DUI, Traffic Violations, and Criminal Defense. He is located in the Tacoma metro area of WA state, and has been helping people with their legal issues for over 28 years.

Consultation are always free and his fees are very reasonable. You can expect top quality representation with our highly-skilled, effective, and experienced law firm. Dennis will personally handle every aspect of your case.